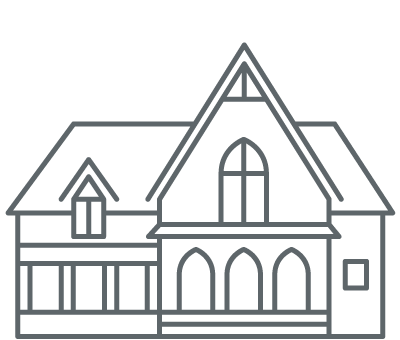 Early 19th Century Europe experienced a renewed interest in Christianity, which was thought to be a backlash against the neo-classical and rationalism that appeared to fuel the American Revolution. In turn, structures began to reflect elements contained in the great cathedrals of the past. Ultimately, this influence was seen in residential architecture to a certain degree. So if you see a home that reminds you of a church, there’s an excellent chance it is a Gothic Revival. The style is characterized often by steeply pitched roofs and cross gables. The windows are often arched with a point (picture stained-glass windows in a church, but less elaborate). Really over-the-top Gothic Revival homes will evoke castles with portions of the roof being castellated or parapeted, and on really grand examples you might also see towers with a pinnacle. These homes also are sometimes confused with Victorian-style homes because they have similar decorative elements in the gables (called bargeboards), but probably no one will punch you if you misidentify a house style (at least we’re hoping that’s the case). Omaha has few Gothic Revival residences, but Kountze Memorial Lutheran Church at 2650 Farnam Street is a great example of Gothic Revival style.