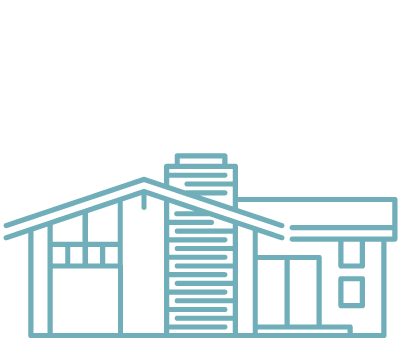 The Ranch style became the dominant style from the early 1950s to the late 1960s and remains a popular style today.

Ranch homes are single story homes with low pitched roofs. We focus on Mid-Century Modern Ranch homes which tend to have a long facade, often asymmetrical, and often spread out, sometimes with the garage turned at an angle, it could be called rambling, a little bit like this sentence. Ranch homes in the 1950s and 1960s ranged from modest homes with little embellishment to larger, sometimes segmented, spread out high-style homes. Even with smaller homes you might see a distinctive Mid-Century detail like a decorative gable that extends asymmetrically at the entry. When we label something a Mid-Century Ranch it could be a basic home built during this era with or without the time-specific touches or a large high-style example that you might see on Dwell.com. The former you can find all over neighborhoods like Robin Hill, and the latter you can find mostly in Indian Hills.